If you’re looking for the perfect fresh cucumber for an afternoon snack, salad, or another tasty dish, look no further than the slicing cucumber. These cucumbers are refreshing, delicious, and long in length; plus, there are many different options for you to grow at home.

But what exactly is a slicing cucumber, and what types of cucumbers are classified as slicing? Keep reading to find out!

What is a Slicing Cucumber?

Slicing cucumbers are just what they sound like: perfect for slicing. Characterized by their longer size and dark green colors, these cucumbers are grown to be served raw for salads, sandwiches, or eating plain.

On the other hand, other types of cucumbers are grown for other purposes, like pickling.

If slicing cucumbers sound right for you, read on to learn about eight common varieties.

Ashley Cucumbers are a popular type of slicing cucumbers because they are resistant to heat and diseases. They’re an especially good choice to grow in southern regions because they do well in hot, humid climates due to their mildew resistance.

These plants are productive, growing fruits are seven to eight inches long. The fruits are dark green and oval in shape, though they are slightly thinner on the stem end. 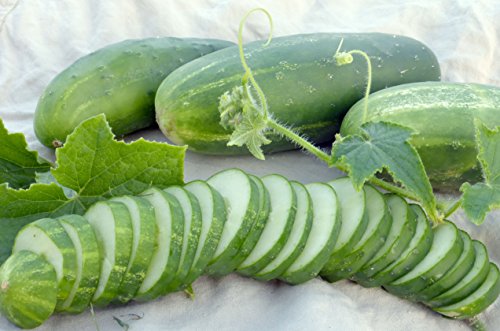 Diomede cucumbers are a type of slicing cucumber that is dark green, long, straight, and well-flavored. Because of these characteristics, many find them to be both tasty and attractive.

In addition to the quality of the fruit itself, there are several key benefits to planting Diomede cucumbers.

First and foremost, they are resistant to common diseases. They also produce mostly female flowers, which is where the fruits grow, so they are especially prolific.

Keep in mind that if you do buy these seeds, 10 to 20 percent of the seeds will be a different variety that will produce the male flowers required for pollination. For this reason, it is recommended you plant all of the seeds to ensure you have both the male and female flowers you need.

Hossinator Slicer Cucumbers are a southern variety of slicing cucumbers. They have a great texture and flavor that makes them ideal for eating fresh, and they typically grow over eight inches long.

Hossinator Slicer Cucumbers take 60 days to mature. They grow both male and female flowers, which means they require pollination.

Perhaps their best quality is that these cucumbers are very resistant to diseases, including mildew, scab, and others that commonly plague cucumber plants.

Olympian Cucumbers are highly productive, generating a large yield and producing fruits over a long period of time. They grow only female flowers, which is where the fruits emerge, and therefore the reason for the high yield.

Like other slicing cucumbers, these are dark green, long, and relatively uniform with a straight shape. They typically grow up to eight inches in length.

Olympian Cucumbers mature in 55 to 65 days. They are resistant to diseases, and in particular, mildew.

Similar to the Diomede Cucumbers above, it is recommended that you plant the whole seed packet, which includes a small percentage of pollinator variety that ensures your plant gets the pollination it needs to grow.

Straight Eight Cucumbers are one of the most popular types of slicing cucumbers. They’re dependable, prolific, and adapted to most climates in the summer months, which helps to explain why they’ve been a top choice for home gardeners for decades.

In addition to these benefits, Straight Eight Cucumbers have a lovely dark green exterior and a straight oval shape.

These cucumbers typically reach maturity in 65 days, which is slightly longer than other varieties. They are typically ready to pick when they reach eight inches long.

Spacemaster Cucumbers are great for small spaces. They are a bush variety, which means they grow on much more compact vines than traditional vining cucumbers.

However, the smaller size of the plant doesn’t stop it from producing a high yield of fruits.

Spacemaster Cucumbers are highly productive, and they grow fruits up to eight inches long. You can also pick the cucumbers earlier for smaller fruits that make tasty pickles. 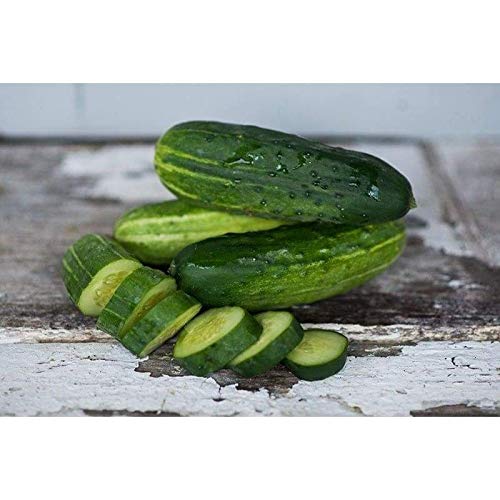 Looking for more information? Read our blog about Spacemaster Cucumbers to find everything you need to know!

Stonewall Cucumbers are another popular type of slicing cucumbers, best known for their attractive appearance and high yield.

These cucumbers are dark in color, sleek, and long, typically growing around eight or nine inches. The plant exclusively grows female flowers, which results in high productivity because the fruits grow from these flowers.

Stonewall Cucumbers are also resistant to common diseases, and they mature in 53 days.

Like with other cucumber varieties that produce only female flowers, you’ll need to plant the whole seed packet to ensure you have enough pollinator variety for your cucumbers to grow.

Tasty Green Cucumbers are a burpless variety of slicing cucumbers, meaning they are low in cucurbitacin (the compound that usually makes cucumbers bitter and can cause indigestion and gas for some people).

This type of cucumber has a mild flavor, thin skin, and few seeds, so if you prefer milder cucumbers, they’re a great choice. Additionally, they can grow up to nine or 10 inches long, giving you plenty of fruit to enjoy!

No matter which type of slicing cucumber you choose, you won’t be disappointed. They are excellent to eat, and they make a great addition to your garden! Plus, if none of these seem right for you, there are plenty more varieties to choose from.

To learn more about cucumbers, including additional varieties and how to grow them, visit our Cucumbers page on the website!