The Japanese plum is a plant much loved by gardeners. This tree or shrub has many uses, simply as an ornamental garden variety or as a source of fruit and even tea. It’s a plum species with a history deep-rooted in the Asian continent and botanical discovery. Today, Japanese plums are the most commonly sourced in the United States for the use of fresh fruit. The sweet scented flowers and bright fruit catch the senses and make it a wonderful addition to any home or garden in temperate to tropical areas.

Where Do Japanese Plums Come From?

The Japanese plum is originally native to central China, but has been grown in Japan for over 1,000 years. It does well in regions with mild temperate to subtropical climates. In the wild, Japanese plums tend to grow at higher elevations. Interestingly, these trees are evergreen and retain their foliage in warmer climates. Eventually the wild trees were cultivated by the native population.

Thanks to the plant’s popularity in the 16th century, which coincided with contact with the Portuguese, the plum traveled widely and became naturalized in countless countries. Today it can be found in its native land as well as in India, South Africa, the entire Mediterranean region, Mexico, South America, and certain areas of the United States. As Chinese missionaries traveled, so did the seeds of the Japanese plum.

This species of plum was first mentioned in medieval Chinese literature, and later recorded by European missionaries in the 16th century during their travels to the area. One of the most notable mentions of the fruit is in the poetry of Li Bai, a famous Chinese poet. The Japanese plum has a wide variety of common names depending on which region it is found. Currently, over 800 varieties exist.

It is said that the Japanese plum made its way to the United States via John Kelsey, a horticulturist from Berkeley. In traditional Chinese medicine, these plums are used to treat respiratory and digestive illnesses.

Like other plums, the Japanese plum is a smooth-skinned, firm fruit. It has a beautiful dusky yellow color when fully ripe, and this unique color is part of why gardeners love having this tree or shrub as an ornamental piece in their collection.

The Japanese plum is a naturally sweet fruit, making it very popular. Many people choose to eat it “as is,” sometimes right from the tree when ripe. Due to this sweetness, Japanese plums are used as a natural sweetener in many dishes to cut down on the addition of sugar.

The meat itself in a ripe fruit is lightly textured, succulent, and flavorful.

The plum’s flavor has been likened to a combination of apricot and peach. This makes it a much-loved addition to jams and chutneys, as does its high pectin content. Like many similar fruit trees and shrubs, the pips of the Japanese plum are slightly poisonous and shouldn’t be consumed.

If your first experience with Japanese plums is having a dish of umeboshi, beware – this is an incredibly salty, sour side-dish in which the plums are pickled in heavily salted barrels. Depending on how the plums are used, the fruit may also appear very wrinkly, salty, or sour due to their high acid content as well. Unripe fruit will of course be sour.

Umeshu and Umeboshi: A Japanese Staple

Umeshu and umeboshi are two common uses for the Japanese plum. Both have made their way into the United States and have become a much-loved part of grocery and package stores everywhere.

Umeshu is made by steeping plums, while still unripe, in liquor and sugar. The alcohol, when finished, has a sweet-and-sour taste to it and an alcohol content of 10-15%. Umeshu is popular enough that it can be found in package stores and is often served at Japanese restaurants. Generally this liquor is stored for anywhere from three to six months in a dark, cold place to ferment.

Many restaurants have embraced the use of umeshu in cocktails, and have the following options on their menus:

Umeboshi is a common dish in Japan made up of pickled plums. The fruit is extremely sour and salty, so it’s not for everyone, but they are often served as a side dish with rice. Umeboshi is made from ripe plums that are packed in barrels with 20% salt per weight of the fruit. Two weeks later, the salt has extracted the juice and the liquid produced from this process can be used as a kind of vinegar. Outside of Japan, umeboshi can be found in most Japanese grocery stores marketed as a snack or flavor accent for certain dishes.

How to Use Japanese Plums

Japanese plums are used in a variety of dishes and preserved many different ways.

In modern recipes, plum tarts, tortes, and cakes are very common. The fruit is ideal for use in baking as its very firm and retains both shape and flavor. The beautiful golden color of the plums also adds to any dish.

Japanese plums have many other uses. It’s possible to freeze them and use them later. Due to their high sugar, acid, and pectin content, they’re a great fruit for jams, jellies, and chutneys. They can also be canned and, when done properly, last quite a long time.

If you do decide to freeze or can plums, make sure the fruit is ripe at the time of the process. This will retain flavor for future use. The basics of canning or freezing involve washing, slicing, separating them, freezing, and packing.

To get the full nutritional value of the fruit, try keeping the skin on in whatever recipe you’re following. They are rich in fiber, vitamin A, potassium, and vitamin B.

Here are some popular recipes that Japanese plums would be perfect for: 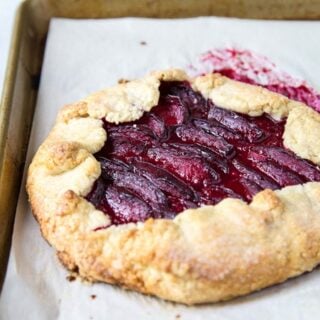 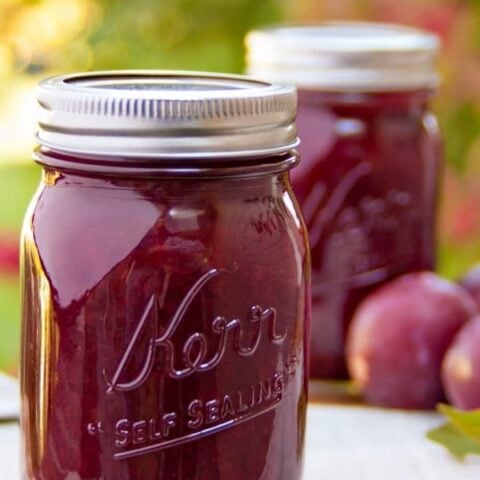 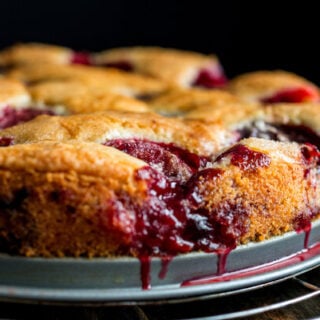 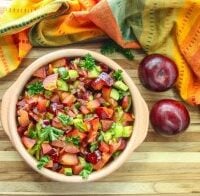 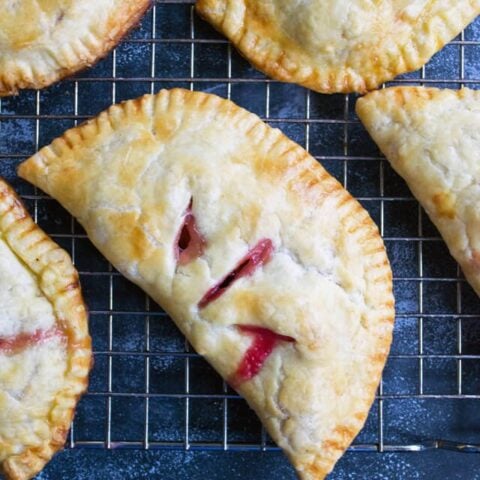 Where to Get Japanese Plums

Due to the conditions of their native land, Japanese plum trees grow best in mild temperate to subtropical climates. If you’re interested in having your own home-grown Japanese plums, there is a large variety to choose from. Whether you’re looking for a more ornamental type or a plant that grows an abundance of fruit, a bit of research will go far in finding the perfect fit for your garden.

If you’re only interested in buying Japanese plums instead of committing to a plant, they’re frequently found in stores that carry a wide array of tropical fruit or Japanese grocery stores specifically.

Luckily, Japanese groceries have become more and more popular due to the love of Japanese culture, food, and snacks. Plums are quite common in their fresh produce section and can also be found in the form of umeboshi or umeshu. In Japanese culture their convenience stores are central to the neighborhood and provide more than the basics that are usually seen in US stores. Called conbini, they’ve started popping up in the states and provide a variety of snacks, fresh fruit and food, and other household staples.

For those seeking umeshu only, check out the section of your local package store that carries foreign varieties of alcohol. Along with sake and shochu, umeshu has risen in popularity and is pretty common in liquor stores. Big chains especially will carry a wide enough variety that asking for recommendations is probably a good idea.

How to Grow Japanese Plum Trees

Plum trees are often grown for either flowers or fruit. The Japanese plum blossoms are incredibly fragrant and sweet-smelling, making them a wonderful sense-based addition to any garden. The fruit itself is colored in magnificent gradations of orange, white, and yellow. Surprisingly, the foliage is textured enough to add a tropical look to home gardens.

Plants can be chosen based on what exactly you’re looking for. If the flowers are particularly enticing, Japanese plum trees that flower all at once are available. If fruit is more your thing, you can purchase a plant that flowers and fruits gradually to produce food over a longer season. Commercially, trees flower and ripen simultaneously to flood the market with fresh fruit.

Flowers will appear within the first year of planting, with fruit following in the spring. Mature trees have blooms numbering in the thousands that cover the tree in thick blankets.

In cooler temperate climates the Japanese plum tree will need winter protection. They don’t flower below 30 degrees Fahrenheit and fruit seldom grows ripe in these climates. In the wild, plum trees grow naturally at an elevation of 3,000 to 7,000 feet, making them a hardy plant. They flower 2-3 times a year in more tropical climates and the fruit matures 90 days after the flowers open.

Plum trees require at least six to eight hours of full sun for healthy growth. They do best in loamy, nutrient rich soils that drain quickly with a pH of 5.5 to 6.5. Mature trees can reach up to 30 feet in height. Pollination can occur between trees up to 50 feet apart. It’s best to apply fertilizer after leaves unfurl in the spring, and once more when fruit is harvested. Fruit grows in clusters of 5-20 plums.

For those interested in propagating their trees, this is easy to do via seeds and grafting. Some gardeners are ambitious enough to graft European plums onto Japanese plums to create a one-stop variety plum tree.

Japanese plums are a favorite of many gardeners due to their natural resistance to disease. Common problems related to the plum tree include fungal diseases that appear when soil is too moist, as well as root and crown rot. Treatment with a fungicide will possibly get rid of the disease, but it’s better to make sure soil isn’t too soggy. Aphids, spider mites, and scale insects eat away at the foliage and stems. Various treatments for insects ranges from insecticides to oils.

If you’re a gardener focusing on the flowers rather than the fruit, keep in mind that Japanese plum blossoms are susceptible to fire blight. This disease is caused by a bacteria that makes the plant appear scorched. It usually affects members of the rose family, but has also decimated pear and apple orchards in the past.

The leaves of the Japanese plum tree are often used to make an herbal tea called Biwa Cha. These leaves are heavily textured, which seems an odd choice for tea, but they provide an earthy reddish-brown coloring. The leaves are picked when green, washed, and then scraped to ensure cleanliness. They are then dried and cut up to be brewed. Traditionally, plum leaves are used as a prevention against respiratory illnesses. The leaves also naturally lower blood sugar levels and help treat inflammatory conditions as well as atopic dermatitis.

A mature Japanese plum tree is shaped similarly to a Christmas tree. The leaves are fuzzy and silver on the undersides.

Japan is currently the greatest manufacturer of this plum variety in the world.

The trees or shrubs bloom in autumn and winter, attracting bees with their fragrance. Bees are the main pollinators of the plant in the wild.

Although Japanese plums are well-known for their eye-catching golden color, the color varies into the realm of reddish-blue and orange as well.

It’s actually more common to grow the trees from seed than it is to graft them, which is unusual in commercial planting.