But did you know that there are watermelons with different color flesh, including white? These days they’re pretty rare, but they’re worth seeking out to try for their unique appearance and flavor.

If you want to learn more about the different types of white flesh watermelon, keep reading!

What is a White Flesh Watermelon?

There are a couple of different varieties of white flesh watermelon: White Wonder and Cream of Saskatchewan.

Both of these fruits are much rarer than your average red varieties or even yellow and orange watermelons.

These watermelons don’t turn red as they ripen because they lack lycopene, which creates the red color you see in other more common watermelons.

The White Wonder is a white flesh watermelon that was more common in the 1800s. Today, they’re mostly grown by specialty growers.

They will typically weigh between 3 and 8 pounds, making them much smaller than conventional watermelons. This means they’re sometimes referred to as an icebox fruit due to their small size.

The skin of these watermelons will have darker green stripes than other varieties with very small black seeds inside.

White Wonder watermelons have a higher sugar content as well, so they have a lovely sweetness to them. To make them even more refreshing, they also have a hint of cucumber flavor.

A different type of white flesh watermelon is known as Cream of Saskatchewan. This variety was originally brought to Canada by Russian immigrants in the early 1900s.

These watermelons will be around 5 to 10 pounds at maturity, though some people find that they can get a little bit bigger.

The flesh of Cream of Saskatchewan watermelons is crisp white, dotted with black seeds. The rind displays dark green strips.

One thing to note about this variety is that the rind is very thin and brittle, so they must be handled delicately. They also can’t be stored for as long because of the thinner skin and rind, so you’ll have to eat them quickly!

They are known to be very sweet and flavorful. This is a great white flesh watermelon to grow in cooler areas with shorter growing seasons, such as the Northeastern United States.

You can eat white flesh watermelon in any of the same ways you would use a regular watermelon, and they’re great just sliced or cut up on their own.

If you want to try something more creative, here are some delicious ideas!

Dice up a white flesh watermelon to add to a fresh salsa for added sweetness.

Watermelons are the perfect fruit to use in drinks. Whip up an agua fresca, watermelon lemonade, or a pitcher of watermelon margaritas. The white flesh watermelons will add a fun twist!

Keep it super simple and throw a few thick slices on the grill for a smoky summer treat.

And if you’re feeling ambitious, try your hand at making watermelon sorbet to finish your meal.

Where to Find a White Flesh Watermelon

The big downside to white flesh watermelons is that, because they’re so rare these days, it can be difficult to find them for sale ready to eat.

Your typical grocery stores are unlikely to have them, so look out for specialty markets that tend to carry more uncommon fruits. If they don’t have them already, don’t hesitate to ask if they’re able to get them in for you.

Another place to look is small local farmers. They have more flexibility in the crops they select and will often grow more unusual varieties, so it’s possible someone near you has given white flesh watermelons a try.

While they may be tough to find grown for you, you’ll have much better luck finding seeds to grow white flesh watermelons yourself.

Amazon has options for both White Wonder and Cream of Saskatchewan watermelon seeds. 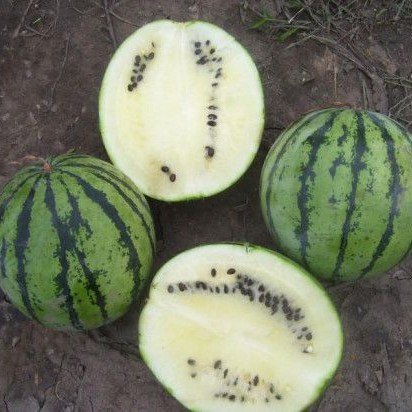 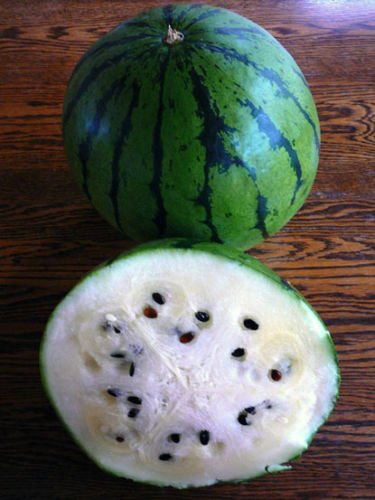 Growing Your Own White Flesh Watermelons

The first thing to know if you want to grow white flesh watermelons is that traditional watermelon flesh can be white when it’s underripe, so make sure you have the right variety.

Choose a spot with lots of space, as all types of watermelons need room to spread out as they grow.

A week or two after the last frost in your area, sow seeds in fertile soil with well-rotted compost and good drainage.

Be sure to water them well, especially during higher temperatures or dry periods. Adding mulch will help keep weeds out and maintain moisture.

Once you notice melons starting to grow, try to keep them off the ground. You’ll also want to be aware of critters looking to enjoy your white flesh watermelons before you get a chance to, so add some sort of protection from wildlife.

How will you know when they’re ready to harvest? We’ve got blog posts on how to tell watermelon is ripe and picking watermelon with detailed information. Here are a few different methods to determine when your watermelons are ripe:

Use a combination of methods! If you’re not sure, harvest watermelons one at a time so you can cut it open and see how it looks.

White flesh watermelons are unusual and delicious, and they’re an absolute must-try if you’re a watermelon lover!

There are so many fun ways to enjoy a new and different fruit…that is, if you can find it.

Check out our Watermelon Plants page to learn all about watermelons!