If you’re of a certain age, you’ll remember summertime watermelon feasting accompanied by contests to see how far you and your friends could spit the fruit’s seeds. But thanks to the development of seedless watermelon, that backyard fun now is all but a memory.

Seedless watermelons, available in many varieties, now command a vast stretch of the watermelon market, due in large part to the convenience of not having to separate out the seeds.

Read on to learn more about some of the many choices in seedless watermelon.

A Brief Introduction to Seedless Watermelon

There are two important things to know about seedless watermelons. First, they’re not really seedless in the strictest sense, and second, they’re not some freakish genetically modified creation.

While it’s true they don’t produce hard, dark seeds like seeded watermelons, they do produce soft, white seed coats, called “pips.” Additionally, they are not genetically suspect; instead, they’re the result of the common agricultural practice of cross-breeding.

That cross-breeding produces a watermelon with three sets of chromosomes. Those watermelons, in turn, only very rarely produce viable seeds. That’s why growing seedless watermelons requires planting them with some seeded watermelons, so that pollination and growth can occur.

Growing Your Own Seedless Watermelons

You can grow seedless watermelons in your home garden, but you should probably read up on how to do it before you try. Our guide on Planting Watermelon is a good place to start, with our Growing Watermelon guide walking you through the rest of what you need to know.

Hoss Tools is a great source for seeds, along with True Leaf Market.

Be sure to check your online seed source, or your local garden center’s seed packet, to be sure you won’t need to buy your own seeded watermelon seeds.

You can also transplant seedless watermelon plants to your garden. Check with your local garden supply store, or a neighbor, to find plants.

If you’re growing from seed, wait until the soil temperature is a sustained 70 degrees, or plant your seeds in a greenhouse for later planting in your garden. In the garden, every two rows of seedless seeds or plants should be alternated with a row of pollinating watermelons.

Depending on the variety you choose, it should take about 12 to 15 weeks from planting for your watermelons to be ready for harvesting.

For a relative newcomer in the world of watermelons, there is a surprising range of seedless watermelons, each with special characteristics to appeal to prospective buyers and growers. Keep reading to learn about some popular varieties.

If you’re growing your own, you can expect to harvest two or three Harvest Moon watermelons per plant, each weighing in at close to a dozen pounds. 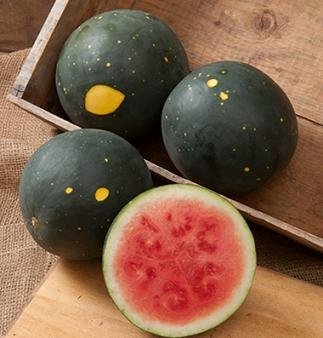 If you want really sweet watermelon, search out the Summer Breeze variety. It has a Brix rating — a measure of its sucrose, or natural sugar, content — of nearly 12 points. One degree on the Brix scale equals 1 gram of sucrose for every 100-gram solution of the substance being measured.

Like the Summer Breeze, the Tailgate Seedless is noted for its exceptional sweetness, and for the high quality of its juicy red pulp. The Summer Breeze can grow in a range of climates, and produces a high yield, making it an ideal choice for the home garden.

If you want to enjoy some decadently sweet seedless watermelon, then you’ll want to know about the Bush Sugar Baby. This petite, icebox-sized watermelon packs a lot of flavor! It’s a great variety for small-space gardens since the vines only grow 3 1/2 feet long.

Be sure to read our blog post on the Bush Sugar Baby Watermelon to learn all about this variety!

Yellow Buttercup is known for tasty melons that are bright yellow when you cut them open. Mature seedless Yellow Buttercup watermelons can weigh from 14 to 16 pounds, but they do have a long growing time, averaging around 90 days.

It’s not hyperbole to call this watermelon by the name Triple Crown, given its superlative place among seedless varieties.

Praised for its taste, the Triple Crown also grows quickly, coming to maturity in around 80 days at weights ranging from 18 to 20 pounds. It’s also a welcome presence in the kitchen, where its firmness makes it a great choice for scooping out perfect melon balls.

Read our blog post on the Triple Crown Watermelon for more information.

Sure, it’s a small seedless watermelon variety, but that doesn’t mean the Mini Piccolo isn’t worthy of recognition.

First of all, the size of the Mini Piccolo, which routinely matures at all of four pounds, makes it the perfect refrigerator-storable treat. And if you’re planning a summertime family picnic, what could be easier than putting a few Mini Piccolo watermelons into the ice chest before heading out?

The Mini Piccolo also is a star in the garden, with each plant capable of producing as many as six watermelons.

The Big Tasty variety of seedless watermelon might be just slightly misnamed. It does have a big taste, with a reputation as one of the sweetest seedles watermelon varieties. But it’s not big at all, weighing around six to eight pounds. Of course, that does make it conveniently refrigerator-storable.

Learn more about this rather ironically named watermelon in our blog post on the Big Tasty Watermelon.

If you’re impatient to enjoy seedless watermelon, the Triple Play might be the variety for you. According to Hoss Tools, you can expect to be harvesting Triple Play watermelons, averaging seven to 10 pounds and perfect for refrigerator storage, in about 80 days.

We hope this post has provided you with a solid background on the seedless watermelon, and has you thinking about growing some of your own to enjoy. For more information, check out our Watermelon Plants page for of variety profiles as well as helpful growing and care guides.