If you’re getting ready to start a garden, you may be wondering about the difference between seed starting mix and potting soil. Is one better than the other? Can you use either one? Is there even a difference? If you’ve been asking yourself these questions, you’re in luck!

I’ve put together a guide to give you answers to all of your questions on seed starting mix vs potting soil.

Although they’re similar, these two products are not the same and they’re each designed for specific purposes. Want to know what those are? Let’s get right to it.

Starting your own seeds is an economical way to set up a garden but it’s not always the most straightforward process. Some things can be confusing like seed starting mix vs potting soil. But don’t worry, I’m here to help!

The short answer is no. Seed starting mix and potting soil are two different things designed for different functions. They’re each made with particular ingredients to accomplish the specific goals of that product.

If you’re wondering if one is better than the other, the answer depends on what you plan to use it for. Both are useful tools when starting plants from seed and make a good addition to your seed starting process. I’ll get into more of the specific uses for potting soil vs seed starting mix below.

The Difference Between Seed Starting Mix and Potting Soil

Potting soil is designed to feed plants for several weeks or months at a time but isn’t ideal for planting seeds in.

To put it simply, seed starting mix is best for starting seeds, while potting soil is best for growing plants.

What is Seed Starting Mix?

A big difference between seed starting mix and potting soil is that seed starting mix doesn’t contain any actual soil. It’s made up of light and fluffy materials like coconut coir, rice hulls, vermiculite, peat moss, and perlite.

These ingredients maintain even moisture and provide very basic nutrients for emerging seedlings.

The loose, fluffy texture of seed starting mix is the perfect environment for seeds to sprout. The consistency is fine without large chunks of bark or sticks that can block the path for seeds to emerge.

This lightweight environment gives seeds room to stretch both up and down. The seeds emerge easily and roots have room to grow without straining to push against heavy soil or objects in the way.

A good seed starting mix gives your seeds the best chance to grow into healthy plants.

Some Seed Starting Mixes to Try

It has a moderate amount of nutrients to feed plants for a short time after sprouting. You can see from the photo that the texture is light and fluffy, perfect for young seedlings to stretch and develop roots.

Another product I like is Sungro Black Gold Seed Starting Mix. I’ve used this before and had great results. The mix is very fine so seedlings can grow quickly and easily. It’s made with natural and organic ingredients like sphagnum peat moss, perlite, and calcium silicate.

This mix has excellent moisture retention so you don’t have to water seedlings as often.

What is Potting Soil?

Potting soil is designed to feed plants as they grow. There may be actual soil, compost, manure, or other organic matter along with some sort of fertilizer. There are usually ingredients like vermiculite or sphagnum peat moss for moisture retention.

If you compare a bag of seed starting mix vs potting soil one of the first things you’ll notice is that potting soil is a lot heavier.

Another big difference between seed starting mix and potting soil is that potting soil has a coarser texture. You’ll often see chunks of bark and small sticks like in the photo below.

This dense and coarse consistency is full of nutrients but heavier and bulkier than seed starting mix.

Some Potting Soils to Try

FoxFarm Ocean Forest Potting Mix is a fine potting soil with natural fertilizers like bat guano, fish and crab meal, and earthworm castings. It’s not as coarse as some other potting soils so it works well with small plants.

Miracle-Gro is a popular brand with many tried and true products. This Moisture Control Potting Mix is specially designed to maintain moisture better than many other potting soils.

It has sphagnum meat moss and coir along with fertilizer to feed plants for up to six months. You can use this potting soil either indoors or outdoors. 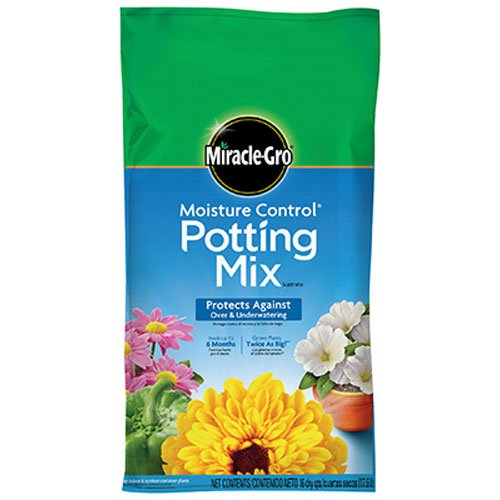 When to Use Seed Starting Mix

Figuring out when to use seed starting mix vs potting soil is actually pretty straightforward. Once you know the difference between the two, choosing the right product for your needs becomes simple.

Seed starting mix is specially designed to provide the right environment for healthy germination and initial root growth. It’s ideal for starting seeds, especially if you’re planning to start a lot of seeds at once in seed trays or plugs.

Seeds contain all the nutrients they need to sprout and begin growing so rich soil isn’t necessary for seeds to germinate. It’s better to give seeds a good environment for growth with a mix that maintains moisture and gives seeds the best chance to sprout.

When to Use Potting Soil

Potting soil is dense and rich in organic matter and fertilizer. It’s designed to give plants all the nutrients they need to grow strong and healthy for weeks or months in containers.

Potting soil is best for seedlings that have at least two true leaves. Once small seedlings start growing, they need more nutrients than seed starting mix can provide. It’s a good idea to move them into larger containers by potting them up with potting soil after you see the first set of true leaves.

Regular potting soil is good for indoor or outdoor potted and container plants.

The truth is, it’s not absolutely necessary, but for seed starting, the mix does offer a lot of benefits when compared to potting soil.

Seed germination is easier and more successful when you use a seed starting mix vs potting soil for starting seeds. The texture of potting soil makes it harder for seeds to grow, especially if you have small, delicate seeds like pepper or tomato seeds.

If you do use potting soil to start seeds, choose a fine-textured product without fertilizer. Too much fertilizer can easily burn small seedlings.

Where to Get Seed Starting Mix and Potting Soil

Both seed starting mix and potting soil are widely available and easy to find. You can get them at nurseries and garden centers, home improvement stores, and big box stores like Walmart or Target.

The best time to find these products in a store is in the spring and summer.

Seed starting mix and potting soil are also widely available online at places like Amazon, Hoss Tools, and Nature Hills Nursery. You can find them online year-round and get them shipped straight to your door.

Making Your Own Seed Starting Mix

If you’re interested in making your own DIY seed starting mix, the process is simple and easy to learn. It takes more time than buying a bag of pre-made mix, but you’ll have more control over the ingredients and you’ll know exactly what’s in it.

As an added bonus, if you make a large quantity of mix it may work out to be cheaper than buying a pre-made seed starting mix. If you’re just starting a few seeds, it may be more cost-effective to buy a small bag of pre-made mix.

For more information on making your own seed starting mix, we have an article with all the details, including what ingredients you need and all the steps.

Making your own Potting Soil

It’s possible to make your own potting soil as well. There are many potting soil recipes available online. The process is similar to making seed starting mix with just a few more added ingredients like compost.

That pretty much covers the subject of seed starting mix vs potting soil! Hopefully, with this information, you’re feeling confident and ready to choose the right product for your needs. If you have more planting and growing questions, don’t miss the Seed Starting page on our website.

We have all kinds of resources to help you plan and care for your garden. From advice on planting different crops and caring for seedlings to tips, tricks, and product recommendations, you’re sure to find some helpful resources for your garden.