How to Prune Blueberries

Why to Prune Blueberries

Backyard blueberry growers may find it tempting to let the blueberry plants figure it out by themselves. While a berry patch in the wild might produce delicious fruit, blueberries that have been cultivated for the garden need to be pruned.

There are three reasons to prune blueberry bushes.

Everything You Need to Prune Blueberries

Now that you know why pruning blueberries is important, make sure you have all the equipment necessary to get the job done. Here’s a list of everything you’ll need to prune your blueberry shrubs. Home gardeners probably have most of this equipment on hand, but it never hurts to check twice.

Blueberries are similar to apples in that they need a certain amount of chill hours in order to produce fruit. Without cold, the flower buds on a blueberry shrub will not open. When choosing a blueberry plant for your garden, check how many chill hours are required for the variety.

All different types of blueberry shrubs follow a similar growth pattern. A cane grows from the crown of the plant. Two types of buds can be found on a new cane: vegetative buds and fruit buds (also called flower buds).

Since blueberries grow flowers on one-year-old wood, each year’s blueberry crop grows from buds on wood from the previous season. As such, winter injury becomes especially harmful to fruit production.

Blueberries will reach full plant size and maximum fruit production sometime between 6 and 10 years old. The plant will reach a height of 6 to 12 feet tall if it is a high bush blueberry, and six inches to two feet if it is a low bush blueberry. Hybrids will be somewhere in between.

Left unpruned, blueberry bushes grow thicker crowns and roots. Buds grow further down the plant and lateral branches become thin and twiggy. Low-quality fruit is produced, and the plant becomes weak as canes cross each other for light and air. A proper pruning process helps blueberries last for decades.

How to Care for Blueberries

While it is important to prune blueberries, it’s also necessary to care for young and mature bushes year-round so they stay healthy. A blueberry bush that is not thriving cannot hold a heavy load of fruit. Of course, pulling out weeds is important, but there are a few more steps to a healthy bush that is ready for pruning.

When young blueberry bushes are blooming, remove the flowers from the entire bush. This seems contrary to your goal – you want blueberries! Even so, removing the flowers of blueberry plants under 2 years old is an investment in future berry growth.

Plants that put energy into growing flowers and fruit before growing a healthy bush structure will have poor vigor and reduced crop load later on. Young plants are not large and established enough to bear fruit. Removing the load of flower will direct growth energy to vegetative buds and roots.

As with any type of fruit trees, insects and other pests can plague blueberry bushes. Bee-safe pesticides can be used if you experience inordinate insect damage to your blueberries. If beetles or caterpillars are eating your plants, remove them by hand as soon as possible. Damage to leaves of a plant can lead to a 1 to 3 year crop reduction. Try caging your blueberry bush with chicken wire to prevent deer or rabbit damage.

Soil is a factor in plant health that many gardeners overlook. However, soil is the food of the plant. Ever heard the saying ‘you are what you eat?’ It certainly holds true for blueberry bushes. You might have noticed that blueberries thrive in areas with pine trees. That’s because blueberries are acid loving plants, and pine needles effectively mulch the soil to make it more acidic.

The ideal soil pH is between 4.5 and 5.5 for best growth and large berries. If the soil is too basic, plant symptoms may include stunted growth, discoloration of leaves, and small berry crop. To increase the pH of your soil, mulch the area with pine needles or a sulfur fertilizer. If you’re not sure how acidic your soil is, any grower can use a simple pH test kit or send a soil sample in for testing.

When to Prune Blueberries

Blueberries should be pruned annually in the dormant season, just like grapes. Most gardeners prune blueberry shrubs in late winter or early spring to avoid cold injury. In most locations, the dormant period for blueberries is sometime between December and March.

The exact time you prune blueberries will change year to year. Always pick a time when the bush is still dormant but the temperatures are rising. Pruning in the spring also gives you a chance to remove branches that have sustained winter injury from a late frost.

How to Prune Blueberries: Highbush Varieties

Blueberry pruning is a little bit different than pruning grapes or apples. Severe pruning is just fine in grapes, and it is common to cut back canes in length. In contrast, moderate pruning is a better approach for blueberries.

Cutting back one year old canes from the previous season will remove fruit buds, not encourage new growth. The bush after pruning would have no fruit buds. Instead, blueberry pruning is supposed to remove unproductive canes.

How to Prune Young Blueberry Bushes

Prune blueberries under three years of age to train them towards an open shape. Soft shoots should be directed to upright canes. Light pruning is best because you are not removing dead wood but rather directing the bush.

How to Prune Mature Blueberry Bushes

Prune blueberries that are three years old or more annually. Your goal now is to maximize the productive period of the fruit bearing plants. You will learn to achieve the right balance of new growth and old growth for the largest fruit and a healthy plant.

By the time you are finished pruning a mature blueberry plant, you will have removed about one third of the wood. This seems like a lot, but it will encourage rejuvenation of the plant.

How to Prune Blueberries: Lowbush Varieties

Lowbush blueberries are usually found in the wild. They are very hardy and low-maintenance, but can be difficult to grow from seed. You will only need to prune this type of blueberry if it is already on your property and you want to maximize fruit production.

While Lowbush blueberries might not be as large and juicy as Highbush, the flavor of wild blueberries is something you’ll never forget! It is still worth the time to care for Lowbush plants if you are lucky enough to find some on your property.

How to Care for Lowbush Blueberries

If you already have Lowbush blueberries near you, encourage them to spread by removing weeds and other plant matter around them. If you have seeds, plant them in acidic soil and remove the flowers or fruit buds the first two years for strong roots. Harvests peak on two-year-old blueberry canes, so prune every other year during dormant season for optimal blueberry production.

How to Prune Lowbush Blueberries

Lowbush blueberries spread by rhizomes, which are stems running underground. These stems send out new roots down into the soil and new canes up through the earth. This means they are difficult to kill and easy to prune.

Here’s the simple process to prune blueberries of any Lowbush variety:

Now you’re all set to prune blueberries! Be confident and remember that with time all this information will come naturally.

Plant is delivered in a #2 size container. It is fully rooted in the soil and can be planted immediately upon arrival, weather permitting. For Best results, plant in used zones 5-8. Mature Height is 2-3ft, mature spread is 2-3ft. 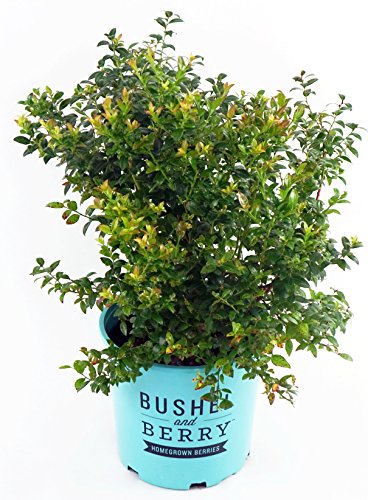 Buy Now
Learn More
We earn a commission if you click this link and make a purchase at no additional cost to you.

Enjoyed reading about how to prune blueberries? Learn about other types of fruit, as well!

Elephant Heart Plums: A Sweet and Delicious Plum
← Previous
The Satsuma Plum: Everything You Need To Know
Next →
Click here to cancel reply.