So why grow cucumbers in your backyard? Well, first of all, many varieties are great for making pickles, which add great taste to everything from hamburgers to potato salad. Other cumber varieties are great in salads and other dishes you can make at home.

Even better, cucumbers are easy to grow at home, an ideal choice for novice gardeners and a good ongoing crop for more experienced gardeners. About all you’ll need for success is a backyard garden plot that gets full sun and has well-draining soil.

Read on to learn about selecting cucumber seeds that will give you the best results in your home garden, whether you’re interested in pickling or in having “slicing cucumbers” for other uses.

The original Marketmore cucumber, developed at Cornell University in 1968, was improved over the years, with a 1976 release of the variety, to be known as Marketmore 76, praised as particularly vigorous. To this day, the good yield and relatively long harvest season make it a yearly favorite for both home gardeners and commercial growers.

Features of the Marketmore 76 Cucumber

The Marketmore 76 cucumber, with its thick, protective skin and an average length of around eight to nine inches, is a perfect slicing variety. It’s the standard slicing cucumber in the northern United States.

Also, after nearly a half-century on the market, the Marketmore 76 remains renowned for its impressive resistance to diseases and pests.

The only drawback is that this variety matures later than others. But don’t let that deter you because the Marketmore 76 is worth the wait!

For a pickling cucumber with a long history of acceptance and success, the Boston Pickling variety is clearly a wise choice for the home gardener, inasmuch as its history dates back to the 1800s.

Features of the Boston Pickling Cucumber

When you do harvest it, you’ll be rewarded with the firm, crunchy profile of a cuke that holds flavor well from your favorite pickling brine.

You’ll want to know that the Boston requires abundant soil moisture. If you live in a climate with hot summers, this cucumber needs afternoon shade, so select your planting site carefully.

While it might need a little extra gardening TLC, you won’t hold it against the Boston Pickling cucumber when you taste it!

Features of the Beit Alpha Cucumber

The Beit Alpha cucumber, named for the region of Israel where it was discovered, has a straight growth pattern and matures at a length of six to eight inches. The Beit Alpha contains less water than other cucumber varieties, and also is more nutrient-dense than other varieties.

When you eat a Beit, you’ll find it has a sweet flavor, few — if any — seeds, and a tender skin you don’t need to peel.

It’s susceptible to an array of pests and diseases, but that’s true for many cucumber varieties. If you follow best practices for growing cucumbers, you shouldn’t have difficulty growing a crop of tasty Beit Alphas.

If you’re looking for a slicing cucumber that will give you a great return on your investment of time and effort in growing them at home, the Burpless #26 is an excellent choice, producing mild-tasting cucumbers up to a foot long.

Features of the Burpless #26 Cucumber

Burpless #26 is among the cucumber varieties that contain a lower amount of cucurbitacin, the compound that produces bitterness in cucumbers, so it is not as likely as some other varieties to produce the stomach upset that is sometimes associated with cucumber consumption.

While the size might make you only think of using it as a slicing cucumber, Burpless #26 can also be used for pickling recipes (just not in whole form!). But the really good news is how quickly you’ll be able to enjoy these versatile cukes — they’re ready for harvesting in around 50 days!

But we’d be remiss if we didn’t tell you that the vines of this cucumber plant are long and require trellising to avoid disease and produce the best crop. The skin is also thin, which means taking extra care at harvest time. It’s also not a cold-tolerant cucumber variety.

But if you’re up for the extra work, you’ll grow top-notch cucumbers with the Burpless #26. 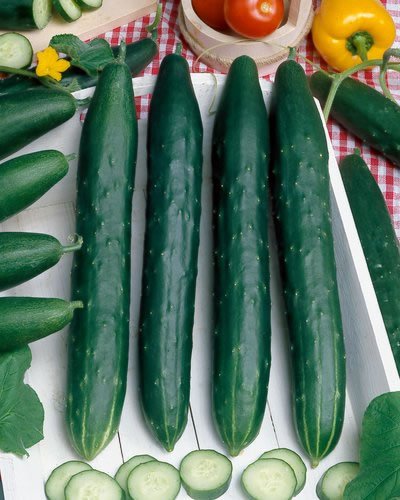 If you’re interested in a cucumber that can be used either for pickling or slicing, the Carolina cucumber is a good place to start. After planting in the spring, you’ll have mature cucumbers on your vines in a little more than four weeks.

Features of the Carolina Cucumber

The Carolina cucumber is one of the most disease-resistant varieties of cucumber on the market today, which of course, makes it a great choice for the home gardener who is new to growing cucumbers.

As your Carolinas grow, you’ll notice that very few grow in crooked shapes or are short fruits. Because they mature early in the growing season, you’ll get to enjoy their sweet flavor in your summer recipes before other cucumbers are ready for harvesting.

Carolinas need consistent watering and fertilizing and they’re a favorite of pests like aphids, squash bugs, and cucumber beetles. But if you’ve grown other cucumbers, you know these pests are the usual unwelcome guests when there are cucurbits in your garden.

Follow best practices for dealing with cucumber pests, and your Carolina cucumbers should be fine!

Developed in the 1970s at North Carolina State University, the Regal cucumber is a pickling variety that is both attractive and disease-resistant, which highly recommends it as a good choice for the home gardener. Since it came onto the cucumber scene, the Regal has been a long-time gardening crowd favorite.

Features of the Regal Cucumber

A fast-growing cucumber that, like other varieties, will pay quick dividends to the home gardener, the Regal cucumber also is resistant to a number of common cucumber diseases, including scab, anthracnose, downy mildew, and cucumber mosaic virus, which also should instill confidence in the home gardener.

The harvest season for Regals last from July through September, when you’ll pick the most perfectly shaped pickling cucumbers (get those pickling recipes ready!).

If you save seeds to plant the following year, don’t expect the plants from saved seeds to do very well. After all, the Regal is a hybrid fruit, and, as a rule, seeds from hybrids tend to disappoint. 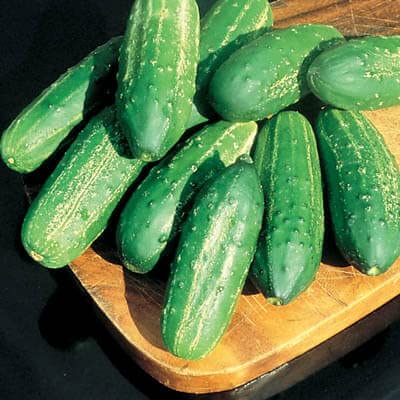 There are many different varieties of cucumbers, so as a first step, it may be helpful to choose whether you’re interested in having cucumbers for pickling, or if you’d like so-called “slicing” cucumbers more suited for salads, sandwiches, or other uses.

It’s relatively easy to find descriptions of cucumber varieties online, and those descriptions will routinely include information on whether a particular variety is more suited to pickling or slicing. In some instances, one cucumber may be suitable for both uses.

Other Considerations for Picking Cucumber Seeds

Broadly speaking, slicing varieties can grow up to a foot long, but you’ll want to harvest them before they reach that length for the best flavor. Pickling varieties will be much shorter, typically no more than six inches long, and have more seeds than slicing varieties.

When choosing your favored cucumber variety, you’ll need to consider its growing habits. If you have limited space, choose a cucumber that grows in bush form, or be prepared to install a trellis on which your cucumbers can grow upward instead of outward.

A Note on the Science of Cucumbers

In terms of the science of growing cucumbers, you might want to consider finding out whether the seeds you are buying for your backyard garden are “monoecious” or “gynoecious.”

Just in case you still have some questions about choosing seeds and growing cucumbers as part of your backyard garden, here is some additional guidance and help for you.

Are cucumbers a vegetable or fruit?

Not that it will have any bearing on your choice of cucumber seeds, but just so you’ll know and can then impress your non-gardening friends — and likely a few of your gardening friends — cucumbers technically are a fruit, not a vegetable.

Fruits are defined in scientific terms as the edible reproductive structures of flowering plants, containing the seeds that ensure the spreading of the plants. On the other hand, vegetables are defined scientifically as the leaves or roots or other parts of plants that we consume.

However, in culinary terms, the savory taste of cucumbers, along with their use as pickles, or in salads or sandwiches, or wherever else, define them as vegetables. And, of course, cucumbers, unlike other fruits, are never part of any dessert recipes.

Should cucumber seeds be soaked before planting?

Cucumber seeds normally will sprout well without soaking in water before planting, but soaking them will lead to the growth of more cucumber plants, and those plants will have a higher yield than seeds placed directly into the ground.

But it’s important to properly soak your cucumber seeds. If you have access to either water from a spring or water from melting snow, those are the best choices, with non-carbonated mineral water from your local grocery store being an acceptable alternative.

Beyond that, there are a couple of methods you can use to soak your seeds, with the simplest being to place the seeds overnight between two moistened paper towels and plant them the next day.

Alternatively, you can soak the seeds in a glass jar with a screened lid (for no more than eight hours), drain the jar and rinse the seed, add lukewarm water and place the jar on its side. Repeat the process two or three times daily for two or three days, and when you see small roots emerging, plant the seeds.

You can start your cucumbers by planting seeds in an indoor container about four to six weeks before the anticipated last frost in your area, after which the seedling can be planted outdoors.

However, starting cucumbers from seed indoors can be a labor-intensive process, requiring the use of a grow light, along with some fertilization, and eventually, repotting the growing seedlings.

When planting cucumber seeds directly into the ground, wait until frost danger has passed and the soil temperature is at least 60 degrees. Place the seeds about an inch deep into the ground, with just one seed per hole unless you’re using older seeds, which can be planted two per hold and thinned later as needed.

For more in-depth information on how to get your cucumbers off to their best start, read our guide, How to Plant Cucumbers.

We hope this post has guided you toward the best cucumber seeds for backyard cultivation that will meet your needs in terms of growing them, caring for them, and using them in your kitchen.

For more on cucumbers, check out our Cucumbers page on the website for blog posts about other varieties, plus helpful growing and care guides.

Getting started on your seed growing journey? Use my seed starting guide to find care guides, helpful tips, product suggestions, and more!