Do you struggle with making difficult cuts on tree limbs with manual pruning shears? You may want to look into electric pruning shears. They are a great alternative to manual shears, saving you time and energy.

There are some durable models on the internet, but there are also some low-quality versions that you can purchase without even realizing it. How do you choose?

I’ve narrowed down the nine best electric pruning shears for you! Keep reading to learn more about this convenient tool. 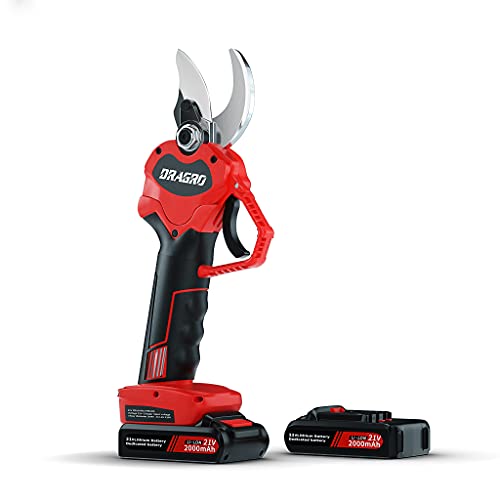 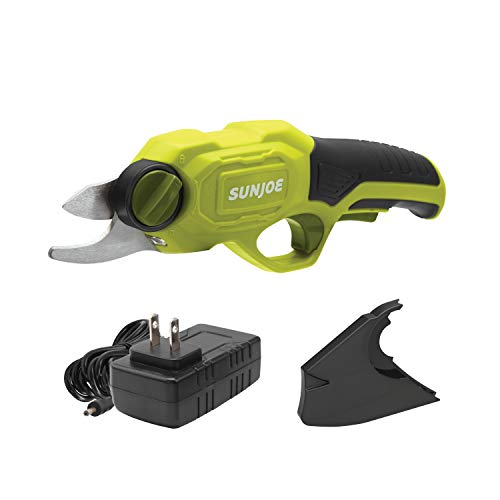 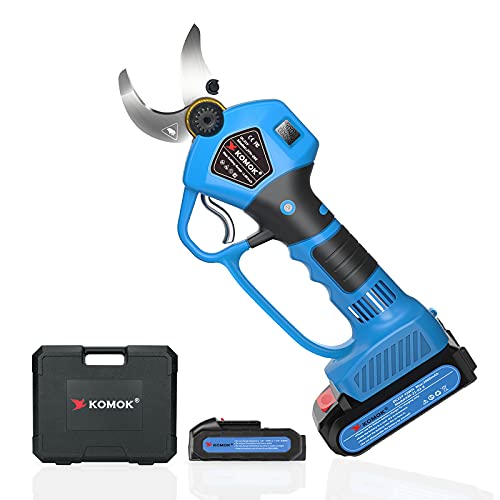 My top pick is the Dragro Electric Pruning Shears and for good reason, too! These electric shears have anti-rust, high carbon steel blades attached to a comfortable handle with an anti-slip grip. The rechargeable batteries can make up to 6,000 cuts when fully charged, which is great for a long day’s work. These shears also have a safety switch to prevent children from activating the shears on their own.

The Sun Joe model electric pruner is great for those who need to trim small branches up to a half-inch thick. It comes with an LED light made into the end of the pruner so that you can see to make precise cuts in dim or shaded lighting. (We don’t recommend cutting limbs at night.) It also has a safety switch and blade lock for when you’re not using it.

Best for Professional Use

These KOMOK model electric pruning shears are great for repeated, everyday use. The blades are made from durable, heavy-duty steel. The batteries are lightweight but long-lasting, and the brushless motor provides good torque power for strong cuts every time. If you prune trees more often than the normal homeowner, these KOMOK electric shears are a great tool to own. 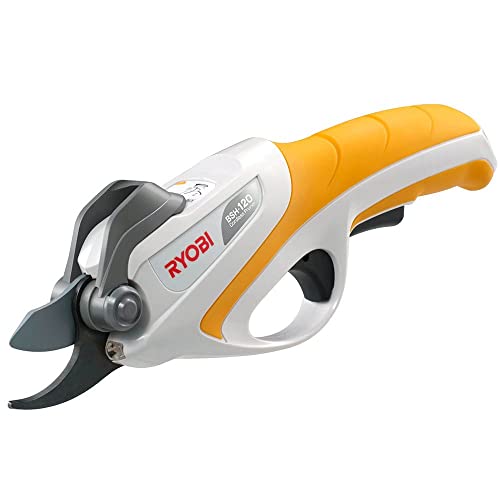 These RYOBI electric pruning shears are a great value for those with a small budget. The shears plug directly into the charger, so you don’t have to worry about lugging around a bulky battery on the end of the shears. Because of that, the shears only weigh approximately seven ounces, so if you have weak hands, this is another good choice for you. 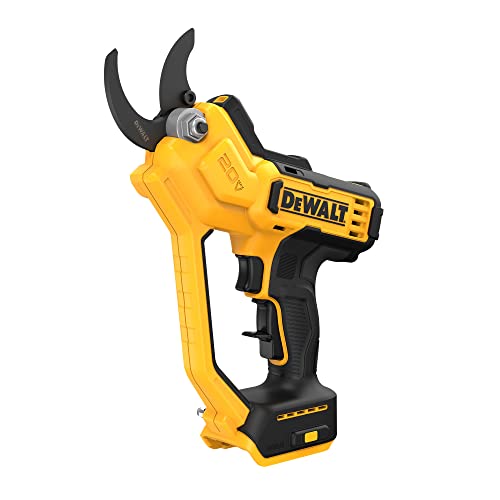 The DeWalt 20-Volt MAX Cordless Pruner is a powerful model with strong, non-stick coated blades. It has a LED light to help you see your cuts, and there is also a safety feature to keep the shears from being operated when they’re not supposed to. The handle goes over your hand to keep you safe when cutting, and it only weighs approximately 2.5 pounds, which makes it easy to hold. 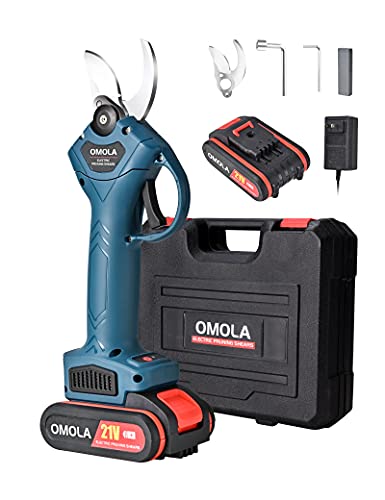 These OMOLA pruning shears are also a great option for those wanting long battery life. The included lithium batteries have around six to seven hours of battery life, and they recharge quickly. The blades on these shears can be inverted to make larger or smaller cuts depending on the size of the limb.

This model also has a safety switch built-in, and it comes with a hard shell carrying case to store all the parts neatly! The best part is the price. The price is hard to beat for all that’s included with these durable shears. 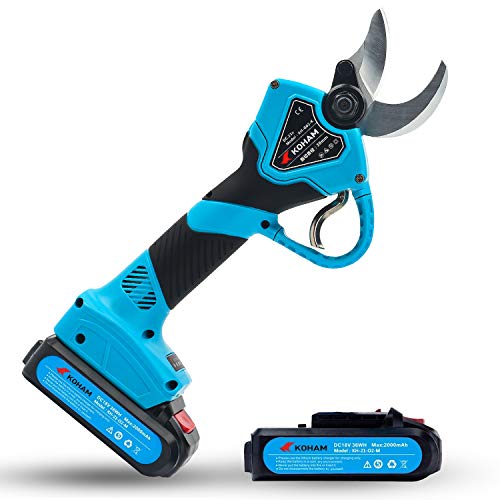 These KOHAM electric shears come with a LED screen display that shows your number of cuts and cutting power, which will help you decipher how much battery life you have left. The batteries’ rechargeable battery port can recharge both batteries at the same time, giving you more time to cut without stopping to recharge. The alloy blades can cut limbs up to 0.87 inches in size quickly and easily. 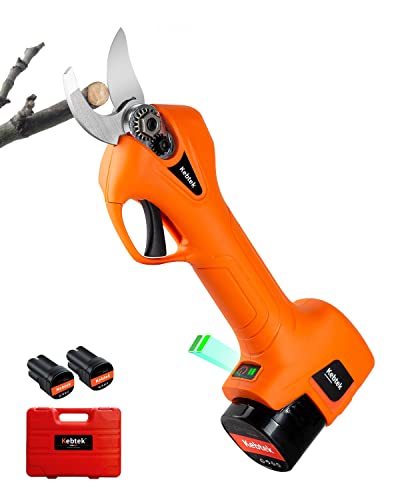 The Kebtek Electric Pruning Shears have high carbon steel blades and a powerful brushless motor. The best part is how long the battery lasts on these shears. You can make 6,000 cuts before having to recharge, and that’s a long time for as high powered as these shears are. 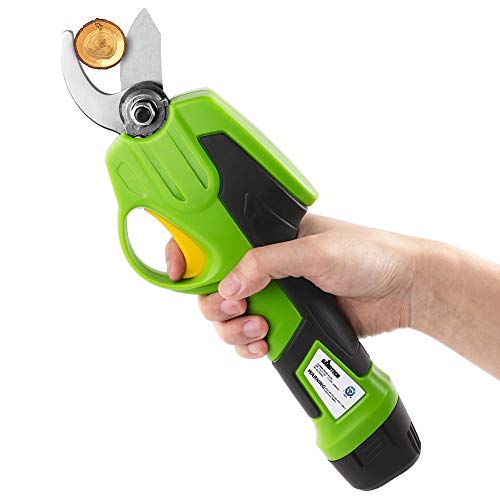 The Gardtech Electric Pruning Shears are great for those with low strength in their hands. The slender handle is designed to be easy to hold, and the shears are lightweight enough to hold for extended periods of time. The battery is also the same size as the handle, so they are easy to maneuver through tree limbs.

What Are Electric Pruning Shears?

Electric pruning shears have the same capabilities as manual ones, but electric shears can deliver the same cut every time. They usually come with a rechargeable battery pack that attaches to the end of the shear handle. The handle has a trigger below the shear head that controls the blades and when they make a cut.

These shears are perfect for keeping trees and hedges maintained. They work best for those who have arthritis or just low strength in their hands. The battery power allows you to simply pull the trigger when you have the blades lined up at the base of the limb, and the blades will make the cut with no effort from you.

The best part is that – given full battery power – every cut is precisely the same. That means your tree will look great, and you don’t have to worry about damaging the tree with a low-quality cut due to poor strength or worn-out shears.

This is the most common type of electric pruning shear. These shears have detachable batteries that must be removed to be charged. This type usually weighs more with the removable battery pack, but cutting power is usually increased.

Shears with internal batteries plug directly into the charger as a whole. These shears are usually more lightweight and cost-friendly. Battery life is typically shorter than those shears with external battery packs.

How to Choose the Best Electric Pruning Shears

Electric pruning shears have blades that typically cut limbs up to 0.5 inches, one inch, or two inches in diameter. Determine what limbs you have to cut. If you are pruning branches on a tree, you will need shears with larger blades. If you only have to maintain small bushes and hedges, you will be fine to purchase shears with smaller blades.

Ease of Use / Ergonomic Design

A big selling point for electric shears is how great they are for those with arthritis or weak hands. Many models have slender handles to help you hold the pruners without getting sore.

If you have children or just want electric shears with safety features, look for models that have a blade lock or a safety switch that requires you to press it two times to get started.

For durable blades, look for shears that have blades made from high carbon steel. Non-stick coatings also help keep the blades clean after cuts.

Electric pruning shears have different battery options. Look for battery packs that have either 2.0 or 2.5 amp-hours. This will give you maximum cutting time, so you don’t have to constantly stop what you’re doing and recharge. Shears with internal batteries usually have shorter battery life.

Just like with manual pruning shears, maintaining your electric shears is important. Make sure to keep your blades clean by wiping them down with a damp cloth after use. Oiling your blades will also help them cut effectively.

Electric pruning shears are extremely sharp and powerful. Always keep your fingers away from the blades while using. If they can easily cut through tree branches, they could easily harm you, as well, if safety precautions are not taken.

Keep your pruning shears stored in an area where children cannot access them, especially if the electric shears do not have any built-in safety features.

How much do electric pruning shears cost?

Depending on the different features and battery capacity, electric pruning shears typically cost between $60 and $300. The higher-end shears are good for professional landscapers. For typical yard work, look for mid-range priced shears.

Not necessarily, but electric pruning shears are great for making strong, clean cuts repetitively. Manual pruning shears depend on the operator’s strength and how many cuts you can make before getting worn out. Electric shears make easy work out of pruning, so you have more energy to work on something else!

What should I do when my electric pruning shears arrive?

The first thing you should do is locate the instructions and make sure you follow any start-up instructions. You will also need to make sure you charge the batteries completely before use. Having a fully-charged battery will let you judge the performance of the pruning shears at their full capacity.

Electric pruning shears are great for those who need extra strength when pruning trees and hedges. They’re easy to hold onto and typically lightweight. My overall top pick for the best electric pruning shears is the Dragro Electric Pruning Shears because of their overall durability, cutting powers, and battery life. But, I’ve also listed several other great options above!

For more information on pruning, take a look at our pruning section!

Shopping for your garden can get overwhelming, fast. So if you’re looking for advice on garden tools and garden supplies, then you’re in the right place!